There are some brave women here on the island who get together and travel the tip-to-tip Confederation Trail by bicycle. Last year a customer got me to make a commemorative décor piece as a gift for his wife who made the 273 km journey.

First I used my iPad to make a mock-up of what he wanted on the board. A few design changes followed, including turning the bike logo the other way around, since the women rode from east (right) to west (left).

The brown portion was to represent the trail itself and the customer wanted it to be routed out so that it wasn’t flat like the rest of the board. He also wanted to be able to put two photos, taken on the day, into the piece. Then he decided to have the top portion of the trail end with a post and the starting and ending place names to be painted on the posts which would extend off the top of the board.

I glued together pieces of pine to make up the board including the two small tops of the posts.

On to cutting out the photo areas, I had two 4” x 6” pieces of glass to use so I cut about 1/4” all around smaller than that with my jigsaw.

Then I used my small router to take away the extra 1/4” just deep enough to fit the glass, photo, and a cardboard backing.

I also routed out places for small glass holders on each side of the photos. This is the back of the piece, you can see how the piece of glass will fit in (and not fall through!), then the photo will go in, covered by cardboard:

The front openings are slightly rounded over, this is what it looks like from the front:

Here is the back with a photo in it:

I will continue explaining how I made this piece in my next blog post.

I am still here working away in my shop everyday. I am hoping my readers from blogspot have switched over with me, please add my site to however you receive blog posts!

Today I am sharing some newer signs and will share some of my larger projects soon.

I use a lot of turquoise colours in my work. We are on an island and there are many tourists here that come for the summer and spend time at the beach. So turquoise seems perfect for a “Beach” sign. I have done both horizontal and vertical stripes which I paint and distress and then paint “Beach” over the top.

I am trying to switch my blog to my own site at followyourheartwoodworking.com

Please let me know if you are seeing this!

I just had to share this. I was cleaning up my workshop a bit today… sawdust gets everywhere. I decided to clean out the two cupboards beside my tablesaw where I keep dado blades, wood throat plate inserts, extra push sticks and jigs.

Well I found this.

Tape, screw in the middle, an angle cut on the end and about 15″ long!
I have absolutely no idea what it is.
The joys of getting old!

I often seem to find myself cutting shapes out of wood. I’ve cut mermaids, lobsters, anchors, whales, the shape of my province, and even pigs and cows.

I decided to do a reverse cut out of a cow, meaning keeping the outer pieces, leaving a blank space in the shape of a cow.
I used some spruce and stained it and then cut the pieces in uneven lengths and glued the pieces together, edge to edge.
The cow shape was cut with my jigsaw. Once I had it cut out I thought it needed something else, the cow needed to be filled in. First I painted the cut edges of the cow with a cream colour and then painted a thin piece of plywood black and screwed it to the back of the piece. I added three coat hooks across the bottom. 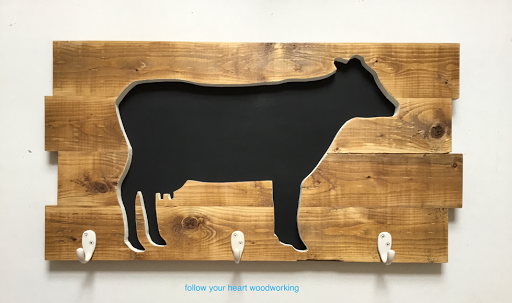 I superimposed Farmhouse and Welcome to give customers ideas of what I could paint on this piece. Someone may want their family name as well. 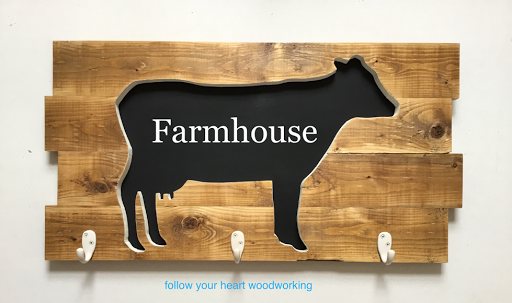 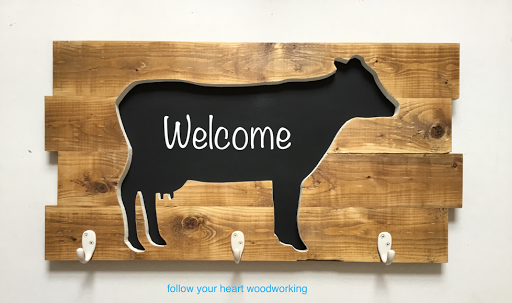 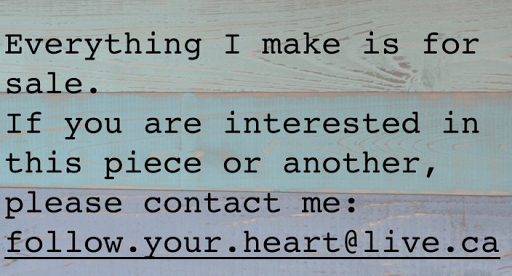 As you probably know, I live on an island and I like to include island-themed pieces in my shop. I’ve made lobsters, mermaids and fish. A few weeks ago I cut a whale shape out of an old piece of barn board, it’s 24″ long.

It sat in my shop for awhile and I felt it needed something extra.
So I found an old bed spindle in my pile of wood parts, and a piece of driftwood from a local beach. I ran the driftwood over my jointer until I got a good stable base. Then I drilled one hole in the bottom of the whale and another in the top of the driftwood base. I glued in the spindle after cutting it to length.
Tada… a whale on a stick! 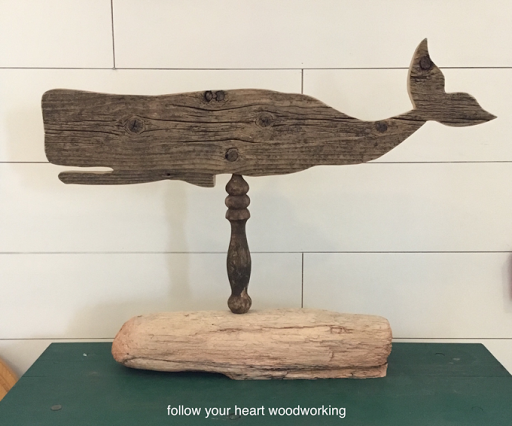 or should I call it a rustic whale weathervane?
I found this online, it sold for $1250.00 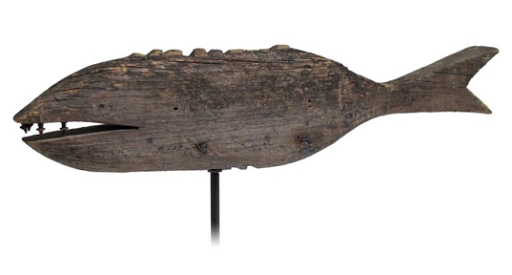 I wonder if I could charge that for mine?

Sharing at:
funky junk interiors
too much time on my hands
Talk of the Town
diy by design
Coastal Charm

Last fall we decided we had better put a new roof on the shop before we experienced a big roof leak. When we bought the house we knew the shingles were in terrible condition and would have to be replaced.

The roof was done in sections to prevent the chance of rain getting through to the interior. The roofers started at the front.

Once the shingles were removed, we could see there were huge gaps in the planks the shingles were fastened to. This place is about 100 years old so these were likely the original roof boards. The roofer needed to put plywood over the old boards, so that they had something to actually nail the new shingles to. Of course this was the right thing to do but greatly increased the cost of the project!

The side roof of the shop had newer brown shingles on it but when they were removed, again, the planks underneath were in terrible shape.

So plywood went on here as well and then the shingles.

Lastly the back was finished… yes more plywood!

The reason this post took so long was that I never got the “after” photos taken before the snow fell. I just took them about a month ago when there was still a little snow around.

The roofers did an excellent job, didn’t cut any corners and cleaned up quite well. BUT it did cost us a small fortune to have this done!

For those of you following my blog, you’ll know that I often decorate the outside of my shop. I’ve had fall leaves, a witch, a scarecrow, and Christmas ornaments.

Our small town of O’Leary, PEI was in the running to be declared Hockeyville, given to a place each year that shows the spirit and passion of hockey. So to be part of the growing town spirit, I created some large hockey sticks out of plywood and stained and painted them. Two are large and placed on the front of my shop. The other three are smaller and hang from my tree, where I often hang things in hopes of attracting drivers passing by!

Well, our town won, which means we get $100,000 for upgrades for our hockey arena and we also get to host an NHL pre-season game next fall!